Everywhere we stay, we take daily walks through the neighborhood, wanting to get to know the layout of the streets around us. Our neighborhood in Omdurman, called Morada, is compact, the streets tracing an irregular grid with occasional curves and diagonals thrown in. Mosque towers dot the neighborhood; no one has to walk more than five or six minutes to get to a mosque for prayers.

At prayer time, wherever we happen to be – Morada, Souk Omdurman, or downtown Khartoum – I often see men washing at long troughs ranged around a mosque yard. These troughs are usually tiled, with elevated seats at intervals, giving each person plenty of room to swing a leg to the left or right as needed. Women normally wash in a separate area of the mosque, indoors and out of sight of the public.

Because prayer takes place at least five times per day, and people are at work, at school, doing their errands, many people end up praying not at the mosque, but wherever they are. People pray on the street, or in a special prayer room at their workplace, in a corner of the shop where they work – I’ve even seen women kneeling on their shawls in a corner of the ladies’ restroom at the Al Waha Mall downtown. You often see men roll out a long green mat or two on the sidewalk, or on the raised porch that runs along a row of shopfronts, or even on a parking lot, so they can pray together in rows, in fellowship. 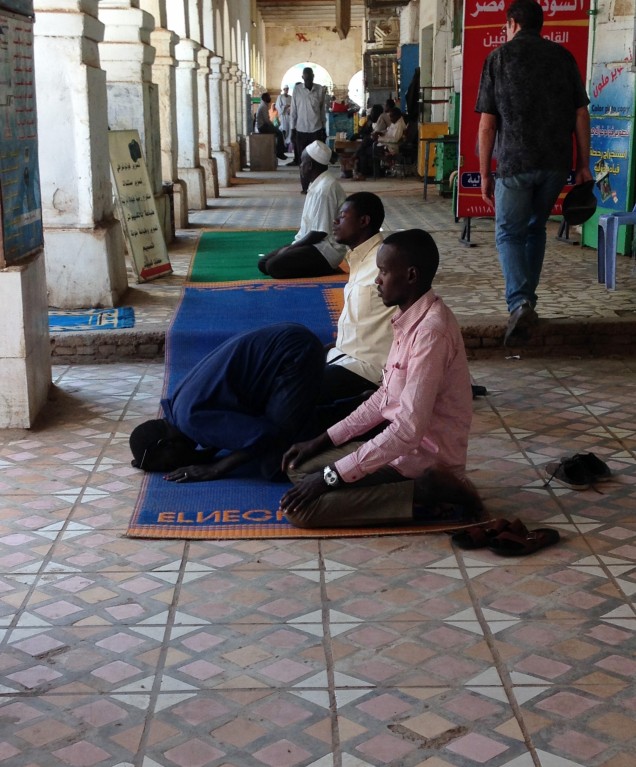 People always wash before prayers, wherever they happen to be when prayer time comes. There are special plastic jugs for washing, with long thin arched spouts – the shape is graceful, and the long spout makes it easy to pour water carefully, without waste. I’ve seen people seated on a low stool, box or even just a roadside curb, going through the thorough process of the pre-prayer wash.

I love watching people do this. There is a slow, deliberate, careful quality to their preparations, as if they’re making a transition into a different space. They rub between their toes, wash the bottoms of their feet, around the backs of their heels and all the way up to the ankles. They wash their hands to above the wrists, paying close attention to each nail. They wash their faces carefully, without spilling on their clothes, and pass some water over the tops of their heads, then pat dry with a handkerchief. This attentive washing feels reverential, a turning inward in preparation for prayer. I am moved when I see a line of men bending down, prostrating to the East, their attention focused, the clean pink bottoms of their feet turned up to the sky.

Prayer isn’t the only thing we see as we walk our neighborhood. People stand in front of their gates, chatting to neighbors. Laundrymen bring bundles of clean clothes to their clients. Children chase each other down the street. Women tear bread and cut vegetables into big steel bowls at the corner shop, then wait their turn for hot meat broth to be ladled in. Tea ladies sit on low stools, their charcoal braziers and boxes of tea, coffee, sugar and spices at the ready, and fast-food sellers package meals to go. Men emerge from their house gates with pots of water for the trees and shrubs they’ve planted outside.

Our local mosque has a beautiful little garden running along one side of its enclosing wall. The garden creates a kind of buffer zone between the mosque and the rubbish that piles up in the street, keeping the precincts of the mosque separate and clean – a refuge.

We were admiring the mosque garden yesterday morning when a middle-aged woman stopped to talk with us. She was wearing a black burqa and a niqab, or face covering, leaving only her eyes visible. This is not typical in our neighborhood, nor is it unusual. All women keep their heads covered, some loosely, some with their hijab wrapped tight, but the face covering is an extra item we don’t routinely see.

“Where from?” she asked in English. Alan answered her in Arabic, and her eyes lit up. They chatted for a few moments, then she asked if we were Muslim – a very normal question from people we’ve met since we arrived two weeks ago. We always answer that we are Christian, as that’s easy for people to understand, and people here generally regard Christians as “people of the book” – people who honor God and God’s word. So it’s an understandable alternative to Islam.

The lady told us she lives close by – she’s a neighbor! – and that her name is Sara. I told her that’s our daughter’s name, and she was pleased by the coincidence. She asked if I was interested in Islam, and I said, “Yes, I find it interesting.” Sara said she was on her way to her Qur’an study class, and urged us to come with her. “You will like it,” she said. Alan asked if it would be okay to leave after five or 10 minutes, and Sara said, “Of course!” She hustled us along up the street, very happy to have us as guests.

We entered a building and followed Sara downstairs into a large basement room, with a classroom set up at one end of it, with a blackboard, a desk in front of it, and rows of seats. No one was there. “Oh, we are late,” Sara said, meaning, of course, that we were early, or everyone else was late. “Sit down, I will read you from the Qur’an.”

And she did. Her voice was just beautiful. I recorded her, so you can listen too.

After Sara recited, we chatted a little more. Her husband, she said, is working in one of the Arabian Gulf states. I got the impression that this means Sara can get her housework out of the way a lot more quickly, so she can come to her Qur’an class as often as she likes. The more complex things she had to say, she said in Arabic (and Alan translated for me). Learning from the Qur’an, Sara said, teaches her and the other students about the place above, a garden full of beauty. She looked upward, and gestured with her hands. “We can think about all these beautiful things as we do our daily duties,” she said.

We thanked Sara for the lesson, and told her it was time to be on our way. As Alan walked towards the door, Sara held my hand and said a few kind things. I said in return a phrase I’ve been learning: “Allah yadeek al’affiyah,” or “God give you health.”

It had a completely unexpected effect. Sara seized me in her arms and hugged me close; her heart pressed to mine. She pulled away, her eyes warm, and reached behind her head. Suddenly, the black face mask was gone., and her face was fully exposed to me: her round rosy cheeks, her curving red mouth.

“I show you my face, so you can know me,” Sara said. “When you see me, you will know me. Not for your husband, only for you. Not for men, not in the street, but for you.”

The smile of her whole face was as sweet as the smile of her eyes above the niqab. The transformation, so sudden, startled me: the sudden opening of a black theater curtain, an act of trust. I didn’t know what to say; I could only thank her, and again stammer out a wish that God should bless her, as she pressed my hands between hers.

As we walked into the bright sun and down the dusty street, I felt light, full of energy and the surge of this love that had entered me so suddenly from another heart. We humans love to connect; we connect across widely divergent cultures, with little language in common. It takes only a loving heart and a press of the hand.

9 thoughts on “Daily devotions and a moment of grace”