Viewed from the bank of the Nile in Morada (the district of Omdurman where we live), or from the bridge we cross into downtown Khartoum, Tutti Island is a beautiful spot of green agricultural fields right in the convergence of the Blue Nile and the White Nile. It looks peaceful and serene, an irresistible draw if you’re growing weary of the dusty, busy city.

Yesterday we walked from Nile Street in downtown Khartoum to the bridge, over the Blue Nile, and onto Tutti Island for a bit of exploration. Just under the bridge, we found a curious little scene: an outdoor pool hall. I’d love to include a few photos here, but according to the rules of my photography permit, I’m not allowed to take photos of bridges (or government buildings, etc.). I figure pictures of pool tables under bridges might be too close to the edge of what’s acceptable, so you’ll just have to imagine it: Huge concrete pylons supporting a bridge high above the ground, with cars and trucks passing overhead. Below the bridge, a tangle of small trees, bushes and shrubs, and hardpacked earth with the usual layer of fine sandy dust. There was a rectangular area enclosed by a wire fence, much like the fences that enclose school playgrounds in the United States, and inside, two pool tables, end to end. Early as it was, several teenaged boys were playing pool.

From the two pool tables in the enclosure, a narrow asphalt road branched to the left, with a couple of snack stands (closed at this point) and stacks of red and white plastic chairs, ready to be set out at the right time.  Branching to the right was a dirt path leading to a row of smaller shops and more pool tables. These weren’t substantial shops – just a row of lightweight frames made of pipework, supporting roofs made of plastic tarps. Below these roofs were boxes, tables and two-burner gas stoves for cooking food. And beyond all this, the glitter of the Nile, a huge blue sky arching overhead, and the riverbank opposite fringed with big old trees and boats waiting for customers.

We walked to where the bridge road dropped down to ground level, and followed the curve of the road around onto a two-lane main street, fairly empty on this bright Friday morning. (In case you haven’t lived in a Muslim country, or don’t know much about Islam, Friday is the weekly day of rest.) A few shops were open for the early morning, allowing people to buy a few necessities for the holiday.

We stopped at a small storefront for some fresh bread – so fresh it was still warm and fragrant – and bought a bunch of bananas at another storefront. Then we started looking for an open tea shop. We saw a couple of men chatting over tea, so we asked if we could buy some. “You want tea?” asked a middle-aged gentleman. “Yes please,” we replied. He gave an order to a young girl, and she headed down the street. The tea drinkers explained that the shop was closed, but said, “Welcome, welcome,” bringing out chairs and a small tea table for us. In a moment, the young girl appeared again with two glasses of tea, and one of coffee. We thanked her, thanked the men, and chatted with them as we enjoyed our tea and makeshift banana sandwiches.

The middle-aged gentleman, it turned out, is from Ethiopia, and he introduced his wife, who had a bit more English. The two of them have been here on Tutti Island for twelve years, they told us, and the shop next door to the tea place is theirs. They welcomed us to the island, hoping we’d enjoy it. “It’s a peaceful place, Tutti,” the lady said, and the two of them said goodbye and vanished.

After we finished the tea, we tried to pay the two men sitting beside us. They smiled and shook their heads, gesturing to the shop next door. The Ethiopian couple had simply had tea brought to us, possibly from their house, because we wanted it. This is just one small example of the hospitality and generosity we’ve experienced since arriving here less than two weeks ago, and it’s typical.

We resumed our walk down the road, hoping to get to the green crop fields that we admire from the riverbank just a few steps from where we live. We turned off the road at a promising place, heading for what we thought was the riverbank. There we met a tall athletic-looking man who was working in a half-ruined building in a field with a few other men. He came over to ask us if we needed any help. His English was very good, and once he understood that we were looking for the riverbank, he walked us along to a good spot, and explained which banks we were looking at from this point, drawing a map in the sandy soil. He showed us where we could walk to see the part of the island we were looking for.

He also pointed out how much the river has eroded the island at this place; there was an orchard to our left that was literally being washed into the river. It’s a terrifying prospect for people who’ve been living on the island for years, planting fruit trees and other crops and making a living from them. There are areas where buildings have been started and abandoned, because these areas have flooded and may well flood again. The man who was talking with us was taking over one of these abandoned buildings, and planning to use it for animals – chickens or goats, I think he said. I imagine these animals will be easier to evacuate than people and all their possessions, the next time the river rises.

As we continued to walk along the river bank, the more rural scenes we were seeking began to unfold. We found a farm area that also had a mud-brick factory. It was interesting to see the bricks laid out in the sun to dry, and to spot the kiln where they get fired. I also enjoyed looking at the deep holes dug out for water, to mix with the clay soil and form into bricks.

The brick factory at the bottom of a little farm. Photo by Alan.

This image shows the deep hole for collecting water to make the mud bricks, and the rectangular tray where they are shaped.

We ran into a few more people as we walked along, mostly men standing about in their bright clean white robes, fresh for the Friday holiday. We had a few conversations along the normal lines – where are you from? What do you think of Sudan? What do you think of Tutti Island? We always say very positive things about Sudan – all true, as we’re enjoying being here, and grateful for this amazing opportunity to live in such an interesting place, so different from our prior experiences.

One gentleman cautioned us, “Yes, people in Sudan are good. Not all of them are good – you should be careful, just like with people in any country of the world. But most of them are good and honest.” It seemed like a fair comment; most of the people we’ve met here have been warm and open, but as experienced travelers, we’re always careful. Still, it’s nice to be in a place where people are interested in foreigners and enjoy talking with us. It’s also great how often people want to help us with things like finding places we’re looking for, or the correct bus to get there – usually before we even ask. It must be the lost looks on our faces. 😉

Here are a few more photos from Tutti.

Wandering along the riverbank on Tutti Island. 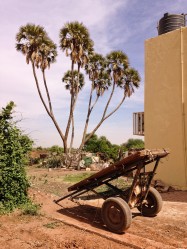 A small farm on Tutti Island. 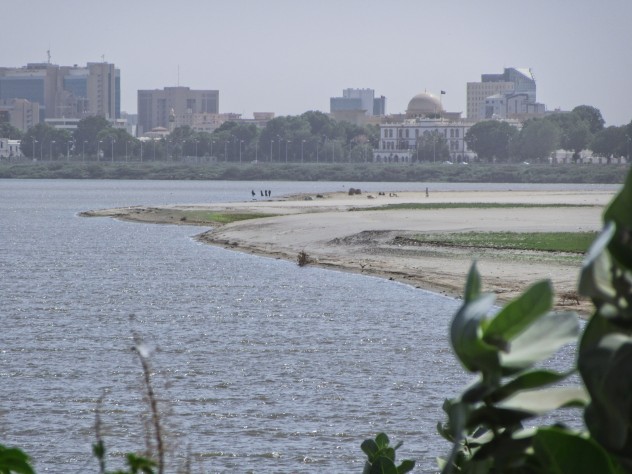 Tutti has plenty of agriculture, but it’s also a small town. We wandered up and down the residential streets, which are really just narrow defiles between rows of houses, nearly all surrounded by high walls. I particularly like the gates to these domestic compounds. 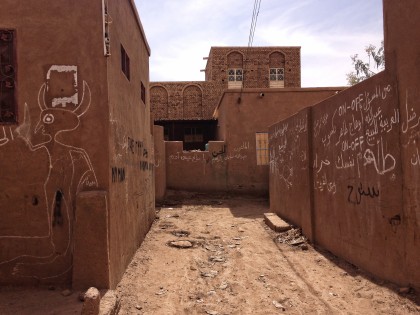 A street corner in the village of Tutti.

One of the bigger mosques on Tutti Island.

We spent a couple of hours walking around Tutti Island, and really, we could have spent a lot more time. But the sun was getting to its maximum brightness, and the heat, too, and we’d been wandering around long enough. (We’re aware that it’s still winter, by the way, and not really hot yet!) We’ll come back to Tutti another time, that’s for sure.