It’s an indoor sort of day today in Omdurman. The sky, or what I can see of it now, is yellow. The view from our rooftop – normally encompassing a wide swath of the Nile from Ingaz Bridge to Shambat Bridge, plus Tutti Island and downtown Khartoum – reveals only faint outlines of buildings that are within easy walking distance. 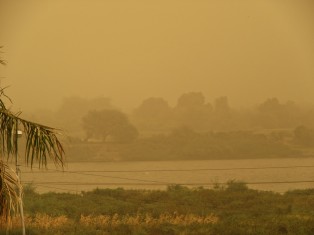 A view of the Nile from our rooftop, during the dust storm. 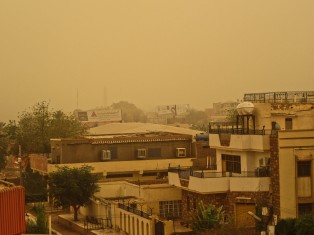 View of the street from our rooftop during the dust storm.

It’s a dust storm, the first we’ve experienced since arriving in Khartoum a month ago. Not a dramatic Hollywood whip-dust-into-your-face-till-you-bleed sandstorm, but a dust storm nonetheless.

We first noticed the wind was up when we left the house just after 8:00 this morning, setting out to find the bus station we’ll need to depart from when we visit Karima. We weren’t sure where to find the correct bus station, so we walked to Shouhada, a transport center just 25 to 30 minutes from our house. We hoped we’d find someone there to tell us whether the right place is called Souk Shabi, or whether we needed to go somewhere else, and to direct us there.

The wind felt refreshing as we walked toward Shouhada, a touch of coolness after a hot night. After a while, though, I had to keep pulling at the front of my kurta, trying to keep it from binding up in front of my legs, while with the other hand I held my headscarf taut along the sides of my face as a dust shield.

By the time we arrived at Souk Shabi, women’s tobes and men’s white jellabiyas were billowing around them, as full as sails on the Nile. Plastic bags whirled, caught in dust devils. Smoke from trash fires blew into our clothing, scenting it with a renegade variety of incense. 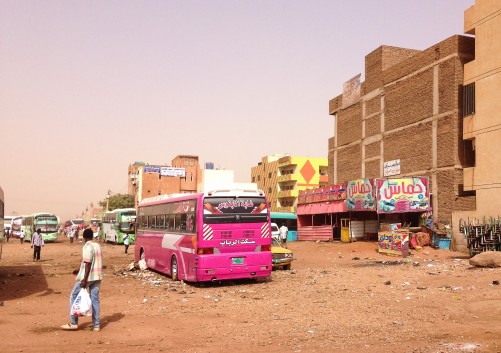 Alan stood at a metal ticket booth, surrounded by curious bystanders, and gathered travel information: Which buses go to Karima? What time should we arrive? How long is the trip? What does it cost? Here in Sudan, where bus stations don’t post timetables and buses leave only when they’re full, we’ve found it’s easiest to get the details before the day you hope to travel.

As we moved away from the buses, a tall thin man wearing a dark purple shirt caught up with us. His name was Mohammed, but he asked us to call him Abu Nazir,  or “father of Nazir.” It’s a way of naming people we first discovered in the Middle East, and it’s commonly used here, too. Abu Nazir was curious about us – where we come from, what we were doing in Sudan – and fortunately for me, he spoke English quite well. A few words missing, as is often the case, but the flow of ideas and emotions was completely clear.

“Welcome to your country,” Abu Nazir said. “Your country, not my country. This is your own country.” This also is a common way of expressing welcome: “Please, welcome to your office,” my boss’s boss said to me yesterday as I arrived at his office for our first meeting.

We walked with Abu Nair towards the main road, chatting together, and he asked if we’d like to drink tea. We didn’t feel we needed any, but he was a pleasant man, and, in the most graceful way, insistent: “Please don’t say no. We are brothers; you do not say no to your brother.”

At the opposite side of the road, Abu Nazir scrutinized one tea lady’s array before leading us to another whose setup clearly looked superior to him. He pulled out two plastic chairs, discarding a third that was broken, made sure whether we preferred tea or coffee, and then surprised us by paying the tea lady 10 Sudanese pounds – enough for just two teas. “I must work now,” he said, showing us the pointed iron rod in his hand, and gesturing to where a man stood waiting no more than 15 feet beyond the tea lady’s stall. “I will get one hundred pound for this work. Come and tell me goodbye before you go.”

We sat in two plastic chairs, rooted by our surprise, unaware at first of the dust blowing straight into our faces. Alan noticed a sheep being pulled out of a rickshaw between the tea lady’s stall and where Abu Nazir stood, pounding a hole into the ground. A man dragged the sheep by one leg, and in vain it hopped to keep up. I realized what was about to happen in the next 90 seconds, so we got up and turned our chairs toward the road, to keep our faces out of the wind and our eyes from the sight of blood.

We sipped at the tea when it finally came, not wanting it but equally not wanting to refuse the hospitality we’d been offered. We walked around a parked white van, putting it between us and the blood and entrails on the ground, and went to thank Abu Nazir.

“No thanks, no thanks,” he said. “There is no thanks between brothers.” He urged us to take his phone number, and to make sure we called him when we want to go to Karima. “These people will charge you big price,” he said, gesturing to the row of dusty travel shops where we stood. “I will make small price. You are my friends, you come to my family home, you eat with us.”

We walked a few paces and then caught a bus for “Stad” – very lucky, we thought. Stad is a downtown Khartoum stadium, so the bus should pass very close to our house in Morada. We settled onto seats that were even more dingy and threadbare than usual, and the bus bounced its way south through a long street of concrete sellers and steel sellers – stacks and stacks of bags of concrete, like bunkers built from sandbags, shored up by heaps of rebar. “All the cement that’s being used to build the city, it all comes from here,” Alan said, reminding me of the many buildings we see under construction in Omdurman and downtown Khartoum.  We proceeded from building materials to a street of perfume stores; the acrid odor of burning plastic was replaced by wafts from a boudoir world. Open-fronted mirror-backed shelves turned rows of shapely glass bottles into ranks of courtesans clad in transparent Egyptian dress.

Presently the bus arrived at a small stadium we didn’t recognize, and all the passengers descended. We’d made a mistake; it was the wrong Stad. We caught another bus to Khalifa Square, got out and walked home on familiar Morada Road. There was little trash to be seen in the yellow dust-storm light, nor any trash fires at this moment. The road was nearly empty of traffic; it was still early, just 10:00 AM on a Friday morning.

A man bought us tea for 10 Sudanese pounds, then excused himself politely to go earn one hundred. A sheep had its throat slit and its body carted away to be cut up into food. A bus took us the wrong way, and we found the right one after all. Now we sit in our Morada house, with our fellow volunteers all doing their Friday things: showering, preparing lessons, playing guitar. The sky is deep yellow. The birds are calling, as they do every afternoon around this time.