Yesterday our friends Satheesh and Bade sent us to visit V.K. Munusamy, an artist who makes traditional terracotta statues and sculpture, including traditional Tamil village horses and guardians. These statues are a familiar sight to those who have visited rural Tamil villages, and the making of them is a very old tradition. In Munusamy’s family, it’s a tradition that goes back 22 generations.

Munusamy lives in Villianur, about 7 kilometers from Pondicherry. It’s a pleasant village that is also home to a large and interesting Shiva temple, where we stopped for a quick visit along the way.

Munusamy learned the art and craft of terracotta sculpture from his parents from his childhood. Today, he has several workshops and employs a number of local women to execute traditional designs, such as small statues of Ganesha playing musical instruments or dispensing blessings, village horses, Buddha heads, and more. It was fun to watch these craftswomen at work.

Munusamy himself showed us how he crafts small Ganeshas from simple shapes. I was fascinated to see how quickly his skilled hands transformed a few cones of clay into a sweet-faced or mischievous-seeming Ganapati. The video below is pretty brief, because I suddenly ran out of storage on my phone, but it gives you some idea.

Munusamy’s work is well known far beyond Villianur. His workshops export to countries all over the world, and he’s also known for creating the tallest versions of a village horse and temple guardian. He’s also crafted tiny versions of traditional sculptures, just half an inch high. Munusamy explained to us it’s because of the specific minerals in the local clay that he can create sculptures of any size.

Apart from the traditional sculptures, Munusamy has also received commissions for highly realistic sculptures. He showed us the statue his workshop is making now, a likeness of Paul Harris, the founder of Rotary International. I was impressed with the statue’s face; it was highly realistic, so much so that I felt I could see the character of the person, even though Munusamy was working from photos, not from life. You can see the sculpture below. Paul Harris stands between Alan and me on one side, and Munusamy and an MFA student from Bangalore on the other side.

Unlike his artisan ancestors, Munusamy is working to spread his knowledge far beyond his family or professional assistants. He’s trained thousands of people, from Tamil villagers to visiting students. The MFA student from Bangalore picture above told us he was studying with Munusamy because his work is so well known. “I am a contemporary sculptor,” he told us. “I try to learn what he does, but I cannot do it like he does. All of us contemporary artists, we know his work and we give him respect.”

The workshop itself was a nice place to visit. The ladies were working in peaceful concentration as we watched Munusamy make Ganapati statues, and talked with him. Several of the ladies had their children with them for the day, and the kids sat near their mothers, studying or snacking. Despite the quiet hum of productive activity, it felt more like the home of a large extended family than a workplace. 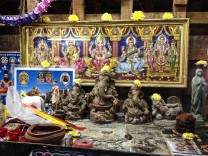 This little girl was visiting her mother, who works with Munasamy.

Two of the ladies who work in Munasamy’s workshop.

As Munusamy finished demonstrating his technique to us, we told him how impressed we were with how he quickly turned a lump of clay into a lovable Ganapati. “I am slow,” he said. “They are the quick ones,” and he gestured to the ladies sitting in a circle around the workshop. “They are the real designers.”