Gokarna is famous for having five beaches that spread southward from the largest of them, Gokarna Beach.  Each is very different in character; we have visited four of them, not quite making it to the fifth. (You might want to read this overview post about Gokarna, which also has a bit about the temples.)

Gokarna Beach is easily five kilometers long from headland to headland. We’ve walked most of it, stopping at Namaste Garden a couple of times for breakfast or tea.

This is one of many guest houses along the beach, and seems to be one of the nicest ones. It’s owned by Krishna Gouda, who started the place back in 1996 with his brothers. Today, he runs the place with his family, including his son, a young man who looks just like his father in the 20-year-old photos Krishna showed me of himself and his brothers, when Namaste Garden was just a small thatch-sided and thatch-roofed shed. Today Krishna has a large commercial kitchen, a dining area facing onto the sea, and a common area for family and guests. There are 11 rooms for guests, each with its own bathroom. I looked at the rooms; they are compact, neat and clean, with a long veranda for reading, chatting or just resting. The garden is beautiful, and the entire place is run on solar power, Krishna told me. 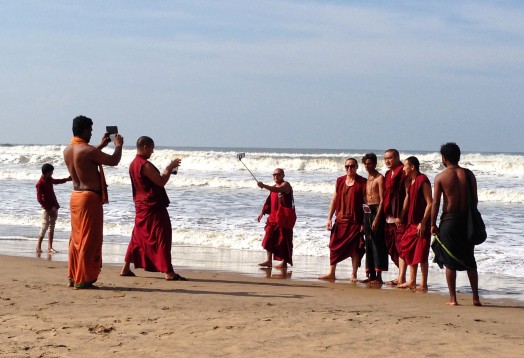 The next beach south is Kudle (pronounced “KOOD-lee”), and it’s the largest after Gokarna Beach. 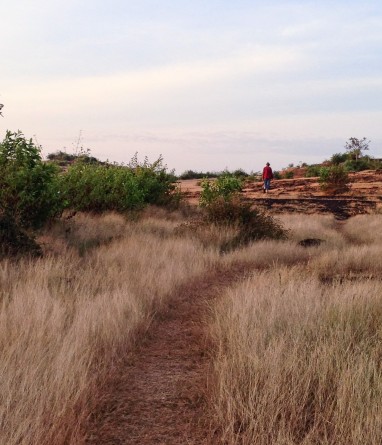 You can get there either by rickshaw or by walking up to the yellow-domed temple on the headland at the south end of Gokarna Beach, and from there, continuing over the broad, grass-covered headland to a steep path that descends to the beach. This is a beautiful way to go. If you take it slowly, it’s 45 minutes from Gokarna town to the northern end of Kudle. And you want to take it slow, at least the first time. If you walk to the little peaks and bare rocks at the edge of the headland, you can look up and down the Karnataka coastline, its beaches protected by rocky outcroppings. It all reminded me of the Oregon coast, but on a smaller scale and with tropical plants instead of evergreens.

Where Gokarna Beach is full of Indians on pilgrimage and on holiday, plus a wide assortment of other visitors, Kudle seems to be favored by younger tourists, including young families with small children, both Indian and foreign. We also see a lot of yoga tourists there, practicing their asanas and stretches on the sand.

Local Indians selling necklaces, anklets, scarves and lungis wander up and down the beach, hoping to sell something. Cafes and lodges line the beach much more densely than at Gokarna Beach.

On our first visit here, we found the surf at Kudle much more gentle than at Gokarna Beach. But the next day, the surf was wilder, due to a cyclone moving its way north from the Kerala coast. Still, swimming in a warm sea was a real pleasure, something that’s been rare for me. I grew up in southern California, but always found the Pacific a little cold for swimming. The Karnataka coast is much more like Hawaii, with warm, welcoming water, even right now in December. Drifting in the waves, or swimming beyond the breakers to an easy patch of rising and falling ocean, looking at the rocky palm-fringed headlands, is incredibly relaxing.

Culturally, Kudle is very much a tourist beach. The guest houses and restaurants are much more tightly packed here than on Gokarna Beach, and there’s little sense of a town life that’s independent of the beach scene.

The next beach south of Kudle is Om Beach, so called because it’s shaped like the Sanskrit symbol for Om, the universal sound. You can see that shape really well only if you walk to the southern edge of Om Beach and climb up to the headland there.

Just a 20-minute walk from the southern edge of Kudle, Om Beach feels quite different from the other two. It is less well suited to swimming, as the beach is much narrower, with a sharper drop to the sea, leaving less room for the badminton, volleyball and Frisbee games people play at Kudle or Gokarna. But Om Beach’s dramatic rocks are fun to scramble across and explore, though very sharp in places – you have to be careful not to graze an ankle or foot.

We made it as far as Half Moon Beach, and nearly to Paradise Beach. From the center of Gokarna, it took us three hours to get to the top of the headland for Paradise Beach, which is where we decided to turn back, mainly because it had grown hot and sunny by the time we got there, and the path down to the beach looked too steep and slippery to deal with at that point. I’m sure Paradise Beach is beautiful, but from what we could see from the headland, it didn’t seem too different from Half Moon Beach.

From Om Beach, the path to Half Moon Beach is pretty wild and tangled. You can see the pathways (there are a few), but they were pretty overgrown. We kept saying, “Someone needs to come through here with a machete.” That makes the walking a bit slower, but what really slowed us down was the steepness of some of the downward paths. We had to hang on to branches to make sure we didn’t slide.

We did the last part of the hike onto Half Moon Beach right at the edge of the sea, scrambling over lava rocks. It was slow, but a lot of fun. I loved the almost greasy look of the black stone, and the way the surf broke over the ragged rock edges.

The Rough Guide we have says there are no facilities on Half Moon Beach, but that’s no longer true. There are a couple of restaurants that also offer rooms for rent. I noticed that one of the businesses has solar panels located in the small patchwork of agricultural fields behind the restaurant, so clearly there are plenty of deliveries coming in by boat. I didn’t see how far the road is from Half Moon Beach, but I think carrying supplies in would be a real challenge if people aren’t making good use of their machetes.

If you’re coming here in the winter, which is the high season, you should try to reserve a room in advance if you want to stay in a place that offers a western-hotel standard of comfort. One is the Hotel International near the KSRTC bus stand. It’s next to the Hotel Om, and it’s very new. We had to stay there the first night, when it turned out our reservation hadn’t gone through. The room was clean and beautiful, and the breakfast (included) was excellent.

We like the older hotels and guest houses, and there are plenty of these both in town and on the beaches. As you go north from Car Street along the road that runs parallel to the sea, you’ll find a succession of guest houses. You can also see them from the beach itself, as most of them have a cafe facing onto the beach. Few of these guesthouses have any kind of web presence, so it’s best to just carry your backpack or take a rickshaw, and just go from guest house to guest house until you find one that has room for you, and whose rooms you like.

Each guest house has its own character, and I think all of them are family-run. One we really liked was Namaste Garden. We had a couple of nice breakfasts there, and liked both the family that runs it and the other guests. We think we’ll stay there next time we come to Gokarna.

Kudle Beach offers a lot of guest houses at prices more suited to short-term vacationers than to long-term travellers, but that are nonetheless reasonable by European or American standards. You can find these on Trip Advisor and other travel sites.

The restaurant we ate at most often in Gokarna was Prema, on Car Street right by the beach. Their traditional South Indian menu items are always fresh and deliciously prepared. They also offer things Westerners like, such as fruit drinks, toast with various spreads, sweet pancakes, sandwiches and so on. I love their huge bowl of fresh green salad – a most unusual find in India. The family who runs this place is friendly and warm. They keep the place clean, open and welcoming, so as you can imagine, it’s usually full. But business turns pretty fast, and you might even get to sit with someone you don’t know, and make friends.

Other restaurants we enjoyed were the Pai Restaurant (there are several), which offers good thalis (full meals) and banana buns (a morning or afternoon treat) and the Sri Shakti in the eastern part of Car Street.

By the way, Car Street is a common name for streets in temple towns, indicating where the temple car (or cars) are stored. Below you can see a photo of the temple car at Gokarna. It was undergoing repairs while we were in town, so rather than being housed in its garage next to the temple, it was out on the street. During the days we were in town, the car received new axles and wheels. We didn’t get to see these being put on, which would have been interesting, as these cars weigh literally tons. (Continue to read reading below the photo to learn a little about temple cars.)

The temple car is used during big festivals. An image of the god is placed in the car, and devotees drag the car around town as part of the festival. It’s considered a great privilege to help drag the car, and so lots of people want to do it. This is fortunate, as the cars are so heavy.

Even when it’s not festival time, gods are often taken out for a procession around the temple, or around town. Usually they’re placed in a litter, which several people carry on their shoulders. We saw this happen every morning and evening in Bhadrachalam, and the procession was accompanied by loud music of wind instruments, drum and bells.

One thought on “More about the beaches of Gokarna”