It was time for Alan’s quarterly haircut. We’ve both had very good haircuts since we first started traveling almost 18 months ago, so we expected to find competent barber. What we didn’t expect was that we’d provide an evening’s entertainment for 10 of the barber’s closest friends.

We headed out for the afternoon with the idea that we’d land up at the barber shop eventually. Some days, our outings are pretty focused – we’re going to buy train tickets, or we’re getting a bus to Chilika Lake to see the dolphins, for example. Other days, we’re pretty much just wandering – yeah, we could get that haircut today, or maybe we can find a new route to the big temple at the other side of town.

Yesterday was a more wandering sort of day, though we did have a particular barber’s shop in mind. A few days ago,  Alan had spotted a hair styling shop on the main road with a really imaginative sign. “Macho,” it was called, with the A indicated by a pair of scissors. We weren’t sure what the shop hours were, though, nor even whether it would be open on a Sunday.

The shop turned out to be open and pretty busy, with both barber’s chairs filled, and both hairdressers at work. Three young men waited for their turn. The air was thick with the fragrance of hair products, so I told Alan I’d head outside and meet him when he was done.

I walked up the main street and turned off onto a narrower road. Pretty soon I was engaged in one of my favorite activities: looking at images of gods and goddesses painted on the walls of the houses. I stopped to admire one beautiful image of a peacock-headed being, and pretty quickly got into a conversation with a friendly man having tea at the tiny shop next door.

Then I got a call from Alan. He’d left the shop and was wandering up the street, looking for me. I went back the way I came until we spotted each other. I was curious why he’d left Macho without getting his hair cut. “I think they really specialize in elaborate hair styling more than just simple haircuts,” he said. I could see what he meant – both stylists had been wearing quite a lot of hair gel, and their customers looked like they were expecting something equally fanciful.

By now we’d rejoined the man I’d been chatting with, who was delighted to meet Alan and resume our conversation. He told us he’s a Brahmin, and then told us all about the peacock-headed being I’d been admiring earlier. His name is Navagunjar, and his body is composed of parts from nine different animals, with each representing a different god, so he combines all the gods in a single being, our new friend told us. Wikipedia tells me that Navagunjar is specifically Odishan, and is a form of Vishnu, the god who is the preserver (versus Brahma the creator or Siva the destroyer). Navagunjar is also a form of Krishna, the god who is an avatar of Vishnu.

Here’s our Brahmin friend in front of his house. 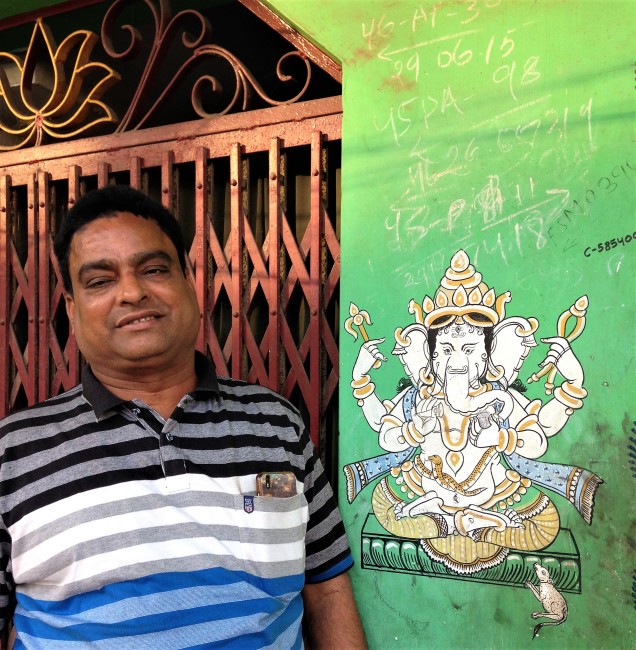 The urgency of a haircut had by now faded in the pleasure of learning about a new (to us) Hindu deity, and in the beauty of the late afternoon light that was turning everything golden. With words of friendship, we parted from the Brahmin and ambled on to the Narendra tank, one of the largest tanks I’ve ever seen anywhere. (In case the term isn’t familiar to you, a tank is a square pond with steps leading down to the water’s edge. Tanks are normally built beside a temple so devotees can take a ritual bath before visiting the temple. They’re also used for daily clothes washing, personal bathing and swimming on hot days.) 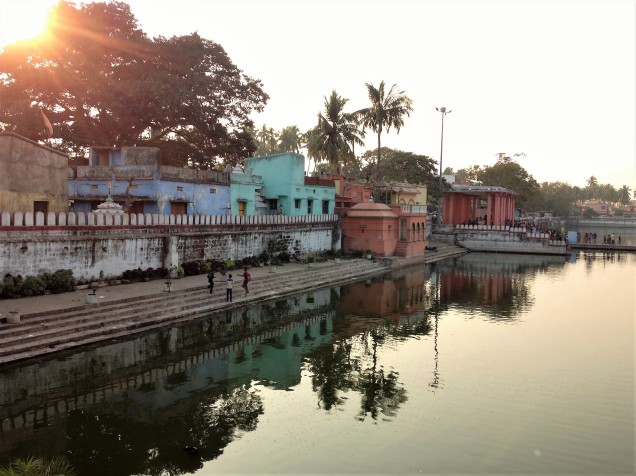 We stood enjoying the patterns of light on the water, and the peace of the place, far enough from the main road to separate us from the intense traffic noise. Across the water, we could see the white dome of a temple amongst tall trees. We still had plenty of time before dark, so we strolled around the side of the tank to see what the temple was like.

It turned out to be part of a larger complex, the ashram of a guru neither of us had ever seen or heard of. Adding to the mystery, all the signage and notice boards were in Oriya – no information in English, nor even Hindi. We couldn’t glean any information apart from the fact that this guru appears to have lived in the 19th century, and that he had a lot of hair and a very large beard. Also, we gathered he’s still very popular: The ashram is large and appears well tended, and as we arrived, a big group of devotees was heading out of the temple grounds to a line of buses out on the road.

After a short visit to pay our respects to the guru and the resident gods, we strolled on, stopping to pick up some fruit for dinner. Night comes on quickly after sunset in this part of the world, so when we spotted a still-open little hair salon just 10 minutes’ walk from our hotel, we were surprised. “Do you want to try it?” I asked Alan.

He asked the young man inside how much a haircut cost. Just 150 rupees, or a little over two U.S. dollars. Quite a reasonable price, so we decided it was worthwhile to get it done now.

The stylist was on the phone, and as he settled Alan, he took another call or two. He closed the sliding glass door of the shop and pulled the curtain, shutting out the dark night.

Alan showed the young man his passport photo, his standard way of showing the kind of haircut he wants. The stylist seemed to understand quite clearly, and offered Alan a seat in one of his two barber’s chairs. Then began the usual routine: the white tissue on the neck, the barber’s cape, the running of hands through the hair to survey length and growth patterns. 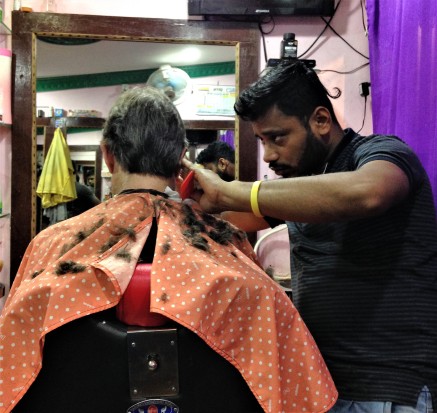 It was after he’d started cutting Alan’s hair that the glass door slid open, admitting three young men. They piled themselves on and around the other barber’s chair, and settled in to watch the haircut in progress. I was surprised, but then again, maybe evening is the popular time to get a haircut, I thought. The young men kept chatting to the barber, and in his replies I kept hearing, “passport.” I guessed they were asking what style of haircut Alan was getting, and the barber was explaining how he knew what kind of haircut Alan wanted.

I was starting to feel warm and sticky. The barbershop was barely 10 feet by 10 feet, and now there were six bodies heating it up. I began to mop my face with a tissue while looking straight at the stylist in the mirror. He took the hint and switched on the air conditioner.

I was cooler now, but the whole situation still felt awkward – the barber cutting Alan’s hair, and three young men watching. It felt even odder when the door slid open and yet another young man entered the shop, settling himself on a plastic stool under the AC unit. What on earth were they all doing here? What was so fascinating about watching the barber cut Alan’s hair?

I turned to look, myself, and said to Alan, “He’s giving you a really good haircut.” It was true – I could see how the barber was cutting subtle layers into Alan’s hair, and yet I said it in large part to defuse what was starting to feel like an uncomfortable situation. I looked at the three young men and said, “He’s a really good barber.” “He’s the best barber in Puri,” one of the buddies said, and then I looked at their heads. Each of them had a different, distinctive hairstyle. “Does he cut all your hair, too?” I asked. They all grinned, and nodded, and suddenly the atmosphere shifted. It became friendlier, more relaxed, and I realized, “They’re bored. This is the most exciting thing happening right now.”

There was a lot of Alan’s hair on the floor – well, it had been several months since the last cut – when the door slid open yet again and four more buddies piled into the shop. I was incredulous, and counted just to make sure. Yes, there were eight of them, and even as I counted again – “My God, there are 11 of us in here” – the sliding door opened again and two more young men entered.

How we all managed to get enough oxygen, I don’t know, but suddenly the haircut was over. The barber ran his hands through Alan’s hair a few times, cut an odd stray hair or two, and brushed him off. The cut was perfect: stylish, trim, and well suited to Alan’s face.

“It’s excellent,” I said, and once Alan had his glasses back on, he looked in the mirror and smiled his approval. “Very nice job,” he said, and added a 20-rupee tip to his payment.

We thanked the barber again, said goodbye to all the friends, and headed out. I was relieved to breathe in the open air again. We both were. It had felt strange, awkward, like being on display. But in the end, the experience turned out to be fun and friendly. And Alan got a really good haircut, too.