It’s been years since we had a pet of our own. But since we’ve been traveling, we’ve had a surprising amount of affectionate interaction with animals. I spent a fair amount of time holding puppies at an animal shelter last year, and since then, we’ve had quite a few random encounters with animals of one kind or another.

Today we set out late in the morning for a walk along the Ganga, intending to get onto the river beach and walk upriver until we got tired or ran out of beach to walk on. It was a bright day, but not too hot. The wind that rushes down the Ganga River valley early each morning, blowing sand into our faces, had already subsided, leaving just a light breeze playing in the tops of trees.

We headed down the sloping dirt path that leads from the road to the riverside, and were immediately joined by a medium-sized dog.

I noticed his beautifully marked brindled coat immediately – that, and the fact that he stopped to eat some lantana leaves. He also gulped down one of the bright orange flowerheads. “Alan, that dog just ate a flower,” I called down the slope, as the dog raced ahead.

I took a while to make it down to the bottom, where  I found Alan chatting with a tall man in athletic gear. His accent sounded American, and sure enough, he is a transplanted American, now living in Canada. He had assumed the dog was Alan’s, and asked about it, starting a friendly conversation about meditation, ashrams, politics and samsara.

We parted after a few minutes and continued upriver, climbing beautiful rocks deeply scored by wind, water and weather. The dog raced ahead, came back to us, nudged his nose under my hand a few times and trotted beside me for a while, before racing off again. He got particularly excited whenever he spotted bandars (chunky brown monkeys) or langurs (black-faced silver-furred monkeys) bouncing in the high branches of the trees that grow along  the beach.

We passed groups of people enjoying the beach and the water, some splashing around, others reading quietly on the shore. Raft after brightly-colored raft of whitewater enthusiasts passed us, floating on the fast current in the center or pulling out to the side to drift. And all along the river were huge boulders here and there, and the views of the forested Himalayan foothills above us. 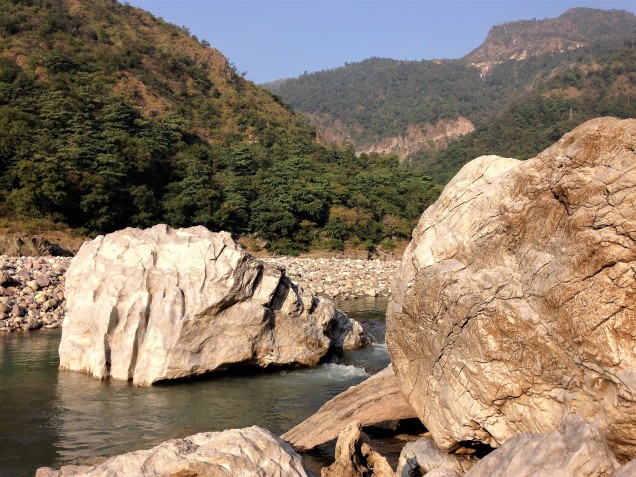 After we’d walked for 15 minutes or so, the beach became very quiet, nearly empty of people. We came across a couple of sadhus, one napping in the sun and the other washing his clothes in the river. The dog visited with each sadhu in turn, but then bounded forward to join us as we continued up the beach.

Eventually we came to some huge boulders, ending that stretch of walkable beach. We found a nice flat place on a sort of shelf above the river’s surface, where I spread out a flowered cotton blanket. Immediately, Dog plopped down and settled himself on the clean surface, scattering wet sand everywhere. “Why don’t you just make yourself comfortable?” I asked, and Alan laughed.

I couldn’t exactly lie down in for a sunbath as planned, so I changed into my bathing suit (discreetly, of course – a skill learned on beach days in my Southern California childhood), and ventured down to the water’s edge.

In case you were wondering, the Ganga is stunningly cold this time of year. “How is it?” Alan asked. I noticed he hadn’t gone beyond taking off his socks and shoes. “Freezing,” I said. “Well, it was probably snow about 12 hours ago,” he informed me.

I decided to be brave and get as far into the river as I could stand. This meant up to my waist. It was so cold I could stay in only by moving around. As I kicked out each leg, fresh currents of even colder water washed over my skin. It was both too much and kind of an interesting feeling. After a few minutes though, I feared the cold would affect the old injury in my lower back, so I got out.

Clambering up the sandy bank in the sunshine made me warm again. I wandered to where the water was shallower, and got in again. It wasn’t exactly warm, but it wasn’t freezing now, either. I stood in the water and watched it drifting around the rocks and my body, the surface rippling and the shadows of those ripples on the sand below. I looked out to the deep channel of the river where the current runs fast, to the white foam where currents collide, and to the quieter channel where the crests of tiny wavelets sparkled in the bright sun.

Returning to Alan and the blanket, I found Dog had left to race up and down the beach. Ignoring the sand he’d left behind, I lay in the sun and luxuriated in the feeling of sunlight warming my cold skin. When I got warm enough I sat up to watch the river again, its surface and the light on it ever-constant and ever-changing.

I don’t know how long we sat watching before Dog came back to us, ready to rest in our company. I scratched behind his ears, first one then the other.

After a while we noticed the light had changed angles, the shadows of huge boulders lengthening their reach out into the river. Evening was approaching; it was time to head back to town, find a meal and settle down for the night.

The walk downriver was as pretty as the walk up, but the beach was much emptier of people now. As we headed back up the steep slope towards the road, Dog joined us. He stopped for another snack of lantana leaves.

Dog trotted with us to where they’re building a new yoga ashram alongside the river, the place where the little tourist restaurants cluster. I didn’t notice when or where Dog left us, but I did see a lot more dogs around. I guess he picked us up when we entered his territory, joined us for the afternoon, and stayed in his own territory when we left it.

I still wondered about the dog eating the lantana. The odor of lantana is strong – it always reminds me of my childhood, and of the little brown butterflies that used to cluster around it. I wondered how a dog could possibly enjoy eating it. Maybe, I thought, lantana has medicinal properties, and Dog is eating it for his health? So I looked it up on the internet, and sure enough, lantana is good for all kinds of things: cancer, itchy skin, leprosy, rabies, measles, asthma and other respiratory ailments, chicken pox and ulcers.  Thank you, Dog.

I couldn’t resist adding these shots of the beautiful patterning on some of the boulders on the Ganga river beach.