Today, our third full day in Siwa Oasis, we decided to take it easy and walk a short loop through date groves to the temple of the oracle, located in Aghurmi village, then on to Cleopatra’s Pool and back to town. It is indeed a short loop – just 7 kilometers – but with all the stopping to look at ruins and springs, to take photos and enjoy a cup of tea along the way, we were out walking and looking around for almost five hours.

It’s fun walking on the small roads in this part of Siwa Oasis. Despite all the motorcycles and motorcycle-trucks, the morning was quiet. We heard and saw a lot of birds of various types. The only one I recognize so far is the palm dove. There are loads of these beautiful mauve-and-blue doves in the palm groves, and their soft cooing adds a gentle note to the atmosphere of the oasis.

The temple of the oracle is just 2.2 kilometers from where we’re staying. This is the famous oracle that Alexander the Great consulted in 331 B.C. – the one that told him he was the son of Amun, an important god of the time – but the temple is considerably older than that. It’s said to have been built in the sixth century B.C. Parts of the temple are blocked off to visitors, but there are great views of the oasis all around.

Before we got to the temple of the oracle, we stopped at a beautiful spring called the Bride’s Spring. Mahdi Hweiti, the guide who took us on a car tour of the oasis yesterday, told us that this is where brides used to bathe before their marriages, but now the tradition has been somewhat abbreviated to include just a simple face-wash. It is certainly a beautiful location, with palm trees all around, interesting rock walls visible below the surface, and bubbles rising from the pool’s azure depths. 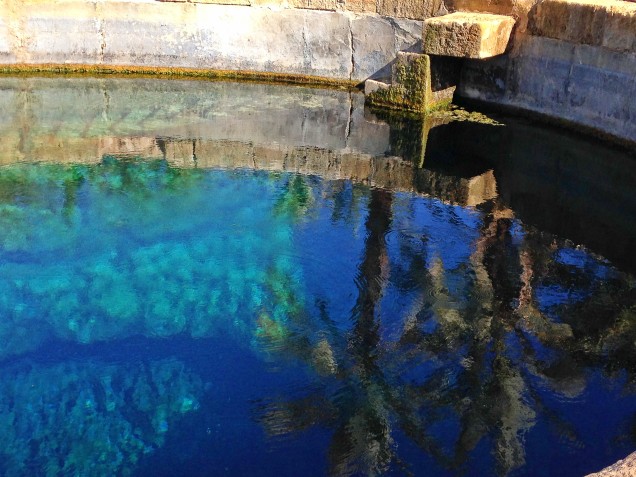 Next, we stopped at a building that looked official, and Alan translated the sign (roughly) as “the administrative center for nature.” We went in, and in fact, he was exactly right: This is the center for administering the protected areas of Siwa. We chatted with Ali, who works at the center, and he gave us a nice short guidebook to Siwa Oasis that includes information about the indigenous animals of the oasis. (It’s called Siwa Protected Area and the Old Town of Shali, by Gabriel Mikhail.) The environmental agency also has an office in the center of Siwa Town, close to the bank and the tourist office, and you can pick up the same little booklet there.

After the temple of the oracle, it’s just a short walk to the temple of Amun, or the temple of Umm Obeidah (which translates as “the mother of Obeidah”).  There’s been a little bit of restoration here, so you can see some of the pharonic carvings that have survived, but there isn’t a lot left. As at many ancient sites in the oasis, well-cut stones have been carried away over the centuries to provide strong foundations for people’s building projects.

The next landmark was Cleopatra’s Spring, a place that’s apparently popular with tourists for bathing. Unlike the other springs we’ve seen so far, this one has several souvenir shops and a couple of restaurants surrounding it, and the local shop owners keep the surface of the pool free of algae.

The shops offer colorful rugs, clothing and other items – all very attractive and decorative, hung in the bright sunshine – and the restaurant where we stopped for tea is also beautifully decorated with traditional basketry, rugs and old Siwan agricultural tools. We tried Siwan tea, quite different from normal black tea, and talked with Omaima, a young woman from Alexandria who’s been living in Siwa for about a year. Like lots of people here, both Egyptian and Siwan, she caters to the tourist trade with handmade and traditional items (she showed me some nice-smelling homemade olive oil soap).

There’s a real movement here towards building ecologically sensitive lodges and hotels, often drawing on the soft, organic lines of traditional mud-plastered Siwan houses. The owners furnish these places with beautifully made palm-wood furniture, rugs and blankets of Berber design, and other traditionally crafted touches. It makes for a warm, inviting aesthetic.

As we walked on from tasteful Cleopatra’s Spring, we circled the Gebel al Dakrour, where people go to get hot-sand treatments for all kinds of conditions, apparently including rheumatism, erectile dysfunction, arthritis and hemorrhoids. 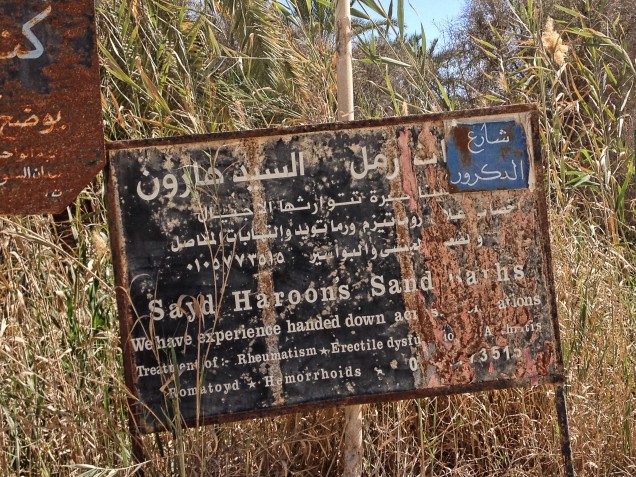 We soon entered the outskirts of Siwa Town. This is the less tourist-pleasing part of Siwa. Houses here are either in the old style construction of kersheef (chunks of salt mixed with rock and mud) with palm-log beams and headers, and a finishing coat of mud plastering. This type of construction is very strong, until there’s a period of heavy rain, which happens once a decade or so. A good soaking can melt a kersheef house into unusability, which is what happened in 1926, when the central old city – the Shali, Siwa’s most famous landmark – became uninhabitable.

Many of the old-style houses are crumbling away, and are being replaced by houses made of a newer material – white limestone bricks. These bricks have become popular throughout Siwa Oasis, because it’s inexpensive and lasts well. It doesn’t have the organic beauty of the older materials, though.

The streets in this part of Siwa Town haven’t been remade with asphalt yet, and like all earthen streets, they are riven with ruts made when vehicles drive over wet soil. Here in Siwa, that doesn’t usually mean rain; the ground normally gets wet when it becomes soaked with seepage from the oasis’ near-the-surface water table.

Despite being less pretty than other parts of the oasis, the humble town streets are fun to walk, because the people we encounter here are friendly, and enjoy a little interaction with the foreigners. They enjoy it even more once they figure out that Alan speaks some Arabic, and the conversation can go beyond, “Where from?”

We finished up our walk feeling a little tired and hot. It was a pleasure to enter the garden where we’re staying, to wash some cucumbers, carrots and fruit for lunch, and rest in the shade of the palms. There’s also plenty of entertainment to be had from the resident kittens and the hotel manager’s children and their cousins, who use the large garden as their playground. 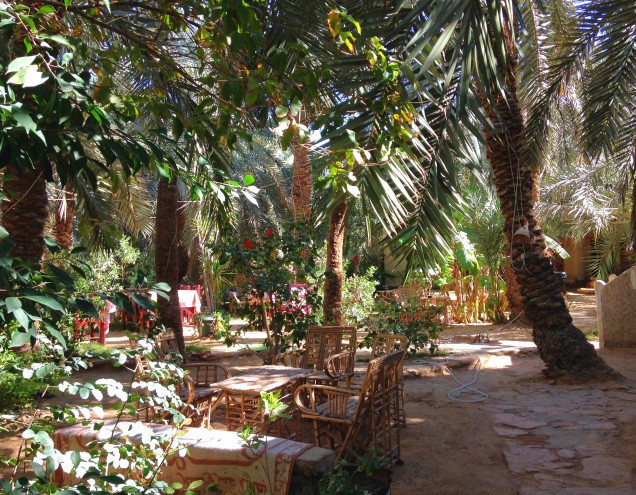