During our time here in Rajahmundry, we’ve remarked on just how many men we see dressed in black. We know these are people going through the 41-day period of fasting and abstinence that pilgrims undertake before traveling to Sabrimala in Kerala, a temple dedicated to Ayyappa, or Ayyappan, as he’s also called.

I knew about these pilgrimages when I lived in India during the early 1980s, but I really didn’t know anything about Ayyappa. Today we learned a lot about this god when we stopped off in the early morning at the Sri Ayappa Swamy temple beside the Godavari River.

You may know that a lot of Indian gods are married and have children. For example, Ganesha, one of the most beloved gods across India, is the son of Shiva and Parvati. Ayappa is unusual because he’s the son of Shiva and Mohini, who is the female emanation of Vishnu. He’s also a celibate yogi and a warrior, regarded as an expression of ethical living, and he’s also famous for conquering a terrible female demon. Ayyappan reaches across religious lines; he is said to have been friends with a Muslim saint, and Indian Buddhists regard him as an incarnation of the Buddha.

We passed the Ayyappa temple several on our morning walks before deciding to go in yesterday. It intrigued us, as it’s always crowded with black-clad swamis, often arriving and departing on motorcycles. It’s almost like a motorcycle gang whose members wear orange-bordered lungis and upper cloths, instead of leather chaps and vests.

All the Ayyappa devotees are swamis during their preparation and pilgrimages, and they all call each other “swami,” or append it to their names. We could hear this in conversations as we entered the temple, and very quickly, a swami in his 30s gestured to us to follow him into the hall on the ground floor. He was just like the other swamis, clad in his black lungi and nothing else, but with a welcoming smile and a focused determination in his eyes.

Swami Prasad (we learned his name when we were chatting later) walked us through the rituals of saluting each god, repeating the Sanskrit prayers for us to follow. Then he took us up a flight of stairs to join a crowd of other pilgrims on the upper floor of the temple. It was open to the sky, with a beautiful view of the Godavari from a balcony as wide as the temple. We also had a great view of the dharamsala next door, where many of the swamis were staying. The balconies there were covered with drying black lungis (from morning dips in the river), and men toweling their hair.

Swami Prasad took us carefully through another set of rituals and prayers at a series of small shrines on the upper floor. We took blessed milk from the lingam puja and drank it, took sacred ash to smear on our foreheads, and we each received a dab of black powder as the final touch on the forehead. (In other temples, we’ve received a dab of vermilion as the final touch.)

It’s hard to explain how all this felt. I am not a Hindu, and while I understand the meanings of some of the Sanskrit prayers (from reading about them), I wasn’t brought up with these prayers. So they don’t evoke for me the deep religious feeling that they can evoke for people who’ve grown up with these rituals and prayers. Children get their early apprehension of a larger presence, of the comfort of God, at the same time they are learning the rituals and prayers their families do every day, so these things are joined. At least, that’s my observation of how it is for most people. So it seems natural that the rituals and prayers don’t act on me the same way they do for Hindus.

That said, something does happen. There is so much power in the gathering of all these devoted, energetic people, and I can feel it running through my body like a low-level electrical current. Worshippers at the Ayyappan temple are mostly male, especially early in the morning, before people set off for work, and probably also because it’s coming up to the pilgrimage season. All that male energy, focused on each god in turn, moving from one to the next in an orderly fashion, I experienced as a current that I entered like a river, and just flowed along with it.

Once all the rituals were done, it was time to relax and chat amid the waving palm fronds and the river beyond. A few swamis came up to us, mostly in pairs, eager to hear where we’re from, practice their English, and have their photos taken with us.

Swami Prasad is second from the left.

Swami Prasad on the left, Alan in the middle, and another swami on the right.

I liked this photo of us that one of the swamis took with Alan’s camera.

After a while, Swami Prasad shepherded us downstairs, where breakfast was being served by a group of swamis. You buy a ticket for whichever of the usual items you want – idly, pongal, dosa, pesarattu – and you get a nice breakfast for very little money. The only missing item was tea: Part of the fast, it seems, is not taking stimulants.

After eating, we chatted for a while longer with Swami Prasad. He told us he works at a paper mill and is also a dancer. This was something I’d read about, but hadn’t met anyone like this until now. There are people who perform traditional dance during the festival season (autumn and winter), but work regular jobs during the rest of the year. I wasn’t surprised once he’d told us this; Swami Prasad has a compact physical presence and moves with a grace that’s noticeable even in this environment, where many people are physically graceful.

The Ayyappa temple has some very impressive dioramas of scenes from Ayyappa’s life. They are composed of nearly life-sized dolls, beautifully painted and dressed, all behind glass. I was able to photograph a few of them without too many reflections on the glass. 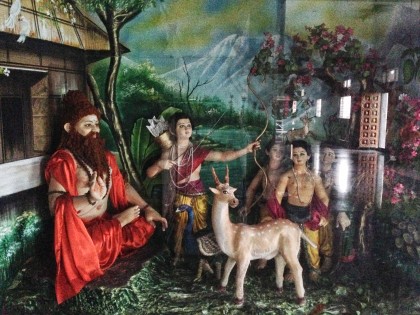 Ayappa as a boy with a sage in the forest.

Ayyappa as a baby with his parents. 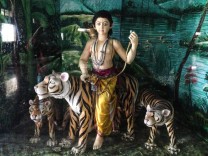 A few of the swamis mentioned to us that we shouldn’t miss the aarti at Pushkar Ghat. This ghat is further north than the walks we usually take, so we planned to set off at 5:00 and be there for the start of it at 6:00, when it’s getting dark.

Aarti, if you don’t know, is a puja in which fire is offered to the deity. People buy wicks impregnated with ghee, or put ghee in a little clay dish, along with a wick, and light that. Aarti can be very dramatic when it’s performed by priests at a temple, with a large metal frame holding a number of flaming wicks. And lots of people worshipping by the river buy little “boats” of banana-stem fiber, load them up with flowers and a wick, then light the wick and set the boat on the surface of the water to float down river.

The aarti at Pushkar Ghat is really quite a show. There’s a boat out in the river, with seating for several priests all lined up, facing the shore. Their assistants light large lamps shaped in various forms associated with Shiva, and wave these around in a highly choreographed way.

Priests on the boat, performing aarti. 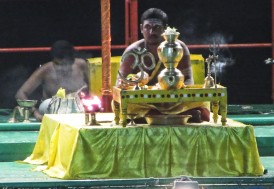 One of the priests and his assistant.

I’m including one video below. It’s as much as I can stand to upload at regular data speeds.

What I really enjoyed was all the groups of family and friends gathering on the ghats to spend a pleasurable evening sending out small boats of fire, praying, sharing snacks and relaxing  in the cool breeze coming off the water. If you’re ever in Rajahmundry, make sure you get yourself to Pushkar Ghat one evening, and enjoy the show.

2 thoughts on “Ayyappa in the morning, aarti in the evening”