We spent two weeks with my mother before leaving for India. I’ve always enjoyed staying in her house, located on the north side of the foothills of the Santa Monica Mountains, just below Mulholland. This is where I grew up from age 13 onwards, and one of the things I loved most about living there was being able to walk up into the hills across from my parents’ house. From the ridge at the top, you can look across the San Fernando Valley to the San Gabriel mountains. On a clear day, it’s simply spectacular.

As you can see, the view of the mountains was obscured on this visit, partly by smoke from a huge fire that was visibly burning on the slopes as we landed.  Of course, we also had the usual pre-rain San Fernando Valley smog muddying the horizon. 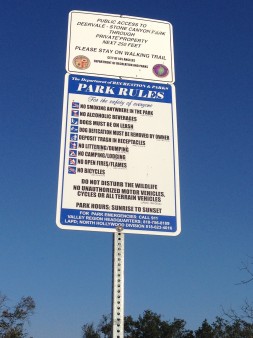 Nonetheless, we started every day with a morning walk up to Deervale-Stone Canyon Park . That’s been for some years the official designation of the wild hilly land where I used to go when I was a teenager, and it’s as nice now as it was decades ago. The hills are covered with long grasses, beautiful wild plants I mostly don’t know the names of, plus California oaks and wild walnut trees. It’s a real wildlife refuge, too, inhabited by deer, rabbits, rattlesnakes, hawks and eagles.

You can walk straight into the park from Deervale Place, but there’s also an unmarked entrance between two houses on Crisp Canyon Road. Either way gets you eventually onto a trail that runs along the top of a ridge, with views on both sides.

Parts of the trail are extremely steep, and the dry dust is slippery, so it helps if you have decent tread on your shoes. Hiking poles probably wouldn’t be a bad idea, and we have seen a couple of people using these.

There are always many interesting plants along the ridge, and even this late in the year, a number were still in bloom.

What we enjoyed most was walking one of the box canyons below the ridge trail, and then bushwhacking our way up the steep, soft-soiled slopes to reach the ridge trail. We saw a lot of wildlife in the morning stillness of the canyons: round little bunnies (so cute!), plenty of hawks, and the occasional eagle soaring majestically.

We were thrilled one morning to spot an owl flying across the canyon. It landed in a tree right above us, close enough for us to admire its cat-ear-like pointed tufts, and watch its head swivel as it surveyed the scene. As we watched, a large pale bird landed on a nearby branch, and began making a loud sound. We wondered if it was trying to drive the owl away, and sure enough, the owl soon took off, with the other bird close on the owl’s tail. Suddenly the pursuer rose, and dove down on the owl, pecking at its back. It was a surprising sight. During our regular walks through Sellwood Park over the years, we’ve seen small birds pursuing eagles, trying to drive them out of the park. But this encounter between the owl and other bird happened just above our heads, and the attack was startling.

We traversed the slopes of the canyons carefully, because of the loose earth and occasional thick growth. Here’s Alan scrambling along a deer trail that ran across a sharp slope. We like to refer to it as bushwhacking.

The slopes hills are covered with golden dry grasses at this time of year, as well as mature trees. But it’s very green the in the folds of the canyons, where water collects.

At the top of the canyon that leads off Madelia, we discovered a lovely wide basin of green, filled with birds flitting from one shrub to another, eating from grass seed heads and calling to one another. 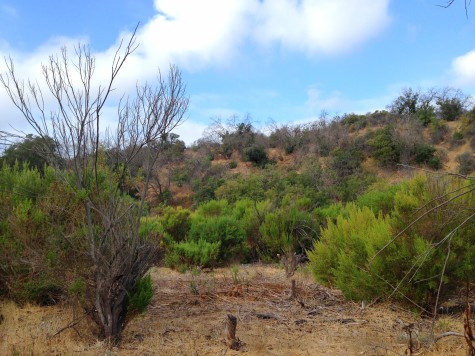 People being what they are, this lovely wild basin was edged with trash – crushed beer cans, food packaging, the usual stuff that I usually avoid including in the frame.  But there were also a few discarded items that had gained a certain patina over the years.

After living in Portland for the past 29 years, where we have not only many beautiful hikes within an hour’s drive away, but also a nature preserve just 20 minutes’ walk from our house, we felt lucky to start every day with a walk into wild areas, where we could fill our socks with grass-seed heads and our eyes with views of mountains, wild birds and blue skies.