You can’t miss the Shali. As soon as you arrive in Siwa Town, you see it looming at the center of everything – a small mountain surrounded by an ancient city of mud houses melting together. It looks like it’s caught somewhere between a fairy tale and a futuristic sci-fi movie.

“Melting” is actually a pretty accurate description of the Shali. It’s the original settled town and fortress of Siwa Oasis, built in the 12th century on a base of rock and clustered around one of the melted-ice-cream-cone hills that are so characteristic of this oasis. The houses were all built out of kersheef, a combination of mud and huge hunks of salt harvested from Siwa’s dried-up salt lakes, with palm logs used as posts, headers, beams and other supporting elements. This traditional Siwa building method can still be seen all over the oasis, though many people are forgoing it in favor of white gypsum brick or more expensive red bricks.

It almost never rains in Siwa, but the Shali’s melted appearance is due to a three-day rainstorm in 1926 that caused a good many of the buildings in the Shali to collapse. That storm, plus subsequent rainstorms in 1930, 1970 and 1985, drove most inhabitants out of the Shali, and spurred the building of small satellite villages around the oasis, a pattern that continues today as the population grows and settlement spreads out further and further from the town center.

The half-ruined structures of the Shali create a fascinating, photogenic place to ramble through. You can follow winding paths through the Shali, and if you dare, climb through doorways and windows, hauling  yourself up ledges. You can do this for days on end, always discovering something new: a spectacular view, a doorway you hadn’t seen before, a wall of windows that somehow has survived intact.

As you ramble, it becomes increasingly easy to imagine what this place looked like before it all melted away: narrow dark lanes between incredibly tall houses, whose walls contain warrens of small rooms.

There were passages built high up off the street between houses, too, so women could pass from one family home to another without going into the street. We’ve seen this same kind of building technique in Dakhla Oasis as well, and I found a surviving example of this on one of our walks near the downtown area.

We aren’t the only ones who enjoy exploring the Shali. Every evening we’ve been here in Siwa, we see people ascending the two peaks of the Shali to watch the sunset. One peak is the actual mountain/hill around which the Shali was built. The other peak is a section of the ruined houses that must have been especially high, as it looms above the ancient mosque of the Shali (the one built at the beginning of the 13th century  –  you can read more about it here).

This mosque has been restored carefully, and is considered the oldest mosque ever built of kersheef, the combination of mud and salt that is the traditional building material of Siwa. This old mosque is on the north end of the Shali, and the rest of the Shali spreads itself south from the mosque and between the two peaks. (And there are at least two more mosques in the Shali maze, both living mosques as well.)

The Shali is incredibly attractive to photograph, as you notice new things every time you visit. As the light changes throughout the day, the look of the Shali changes, too.

We have met quite a few interesting people as we’ve explored the Shali. Some are visitors, and some are residents, including a few foreigners who have invested in restoring old houses. An Italian man we met has made an exquisite, many-roomed rambling home out of a ruin, and is expanding further into adjacent houses he’s purchased. I admired how beautifully he’s furnished his house with traditional old furniture and Berber-patterned carpets. I also loved a painting he hung on one wall, unframed and with rough edges: vague outlines of human figures recede from foreground into the distance, all rendered in a wash of soft blue. The Italian was pleased that I noticed it; he likes it because it reminds him of “the souls of those who lived here, that we live with still.” 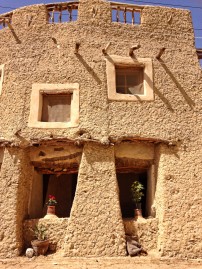 A house restored by a European owner. 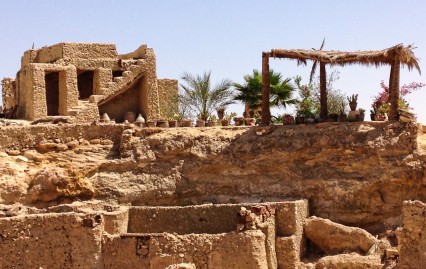 A house with a rooftop garden, restored by a European owner. 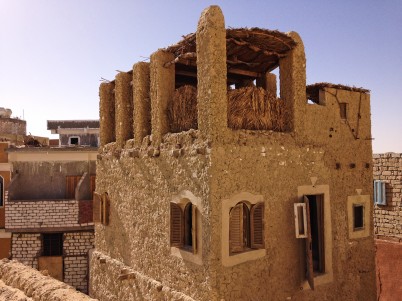 A house under restoration, owned by a European. 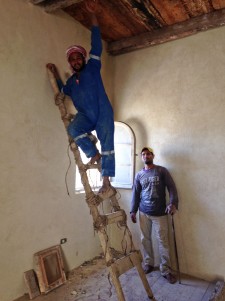 These men are restoring the house.

There are other beautiful restorations here, some done by Europeans, others by Egyptians who have moved to Siwa. One old mosque is currently under restoration; we talked with the Egyptian structural engineer who’s supervising the project, and he took us up to the top of the minaret. It gave us some lovely views of the Shali all around us.

As we’ve been invited into different Shali houses, it becomes clear what an ongoing project these kersheef houses are. One foreigner living here showed us where a crack had opened up in one of the walls of her house when it last rained. She described how she scooped up the mud that the rain made from the bits of fallen wall, and how she stuffed the mud into the crack to repair it.

We stood the other day on one of the high points of the Shali, looking down the other at an expensively restored house owned by a foreigner. We noticed a long crack running horizontally across the decorative facing at the front of the house. Earlier, we’d been told that vertical cracks can be repaired, but horizontal cracks are a disaster, so we looked at each other and said, “horizontal” in a gloomy tone.

It’s not just the kersheef that’s vulnerable; the beautiful palm beams and posts in kersheef houses get attacked by white ants. Once that process has gone far enough, you have to replace the affected wood, and the wood around it. This reminded me of dealing with dry rot in the house we had in Wales years ago; it wasn’t a fun process.

With the various states of repair and disrepair, sometimes it’s hard to figure out whether a place is inhabited or not. A lock on a weathered wood or rusted metal door can mean it’s a residence, or that the space inside is used for storage…..or that someone simply locked it and forgot about it.

The simpler homes we’ve been invited into provide a contrast to the beautifully furnished and appointed houses of the foreigners. Non-wealthy Siwan residents fix windows with any scrap wood that comes to hand, or fill in unneeded windows with stones. Any carpets on the floor are old and worn, and were not chosen for their beauty and authenticity. In one home we were invited to visit, I noticed that nails driven into the walls served as hooks for hanging clothes, implements and a cell phone in a fabric bag.  There was very little electricity, and the wires that had been run in were simply stapled to the wall with nails – the family didn’t bother to bury the wires in the wall, as foreign owners do to preserve the beauty of the mud-surface walls. The lady who invited us in showed us around the house, and I wasn’t sure why until she sat us down and showed me a couple of embroidered dresses. I wasn’t interested in buying them, so as she showed us out, she asked me for money. I gave her a little, and as we walked away, I could hear a woman across the way arguing with our hostess, demanding some of whatever we’d given.

We’ve had some other interesting encounters with people in the Shali. There’s one kindly old man who always greets us politely, shaking hands. I am pretty sure he’s blind, but I am also sure he knows exactly who we are, which I find interesting.

Another old man we met in the Shali informed me within minutes that he wanted to marry me. A local man who was chatting with us at the time pointed Alan out to the would-be groom, and told him I was already married. He also told us this old man already has three wives, so Alan offered the would-be groom an  exchange. Delighted with the jesting, the old man grasped Alan’s hand and laughed so hard, I could just about count his few remaining teeth.

One thought on “Exploring the Shali, the central landmark of Siwa Oasis”